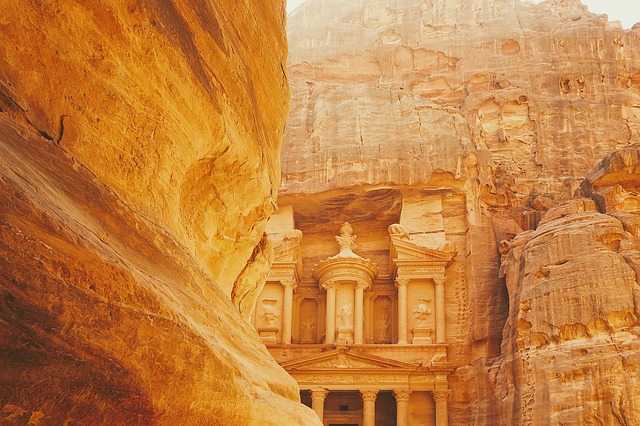 Explore Petra, the ancient desert city in Jordan that was carved into solid rock, viewing its famed Treasury and learning its myriad secrets.

Relax in the buoyant, mineral-rich waters of the famous Dead Sea.

Experience the contrasts of ancient and modern Israel as you explore the Old City of Jerusalem, where people of three faiths live side by side within walls steeped in history.

Learn about modern local life from a Christian family during an A&K-exclusive private lunch at their home in Bethlehem.

DAY 1
Arrive Amman, Jordan
Arrive in Jordan’s history-rich capital city, Amman, where an A&K representative will greet you before transferring you to your luxurious hotel. The Four Seasons Hotel Amman commands an impressive hilltop position, providing guests with extensive views over the city. Spend the rest of your day at leisure, with the hotel’s five-star facilities at your disposal.

DAY 2
Ajloun & Jerash
Today begins with a visit to Jerash, a city founded by Alexander the Great, to marvel at its Greco-Roman ruins. Walk the Roman cardo, viewing grooves made by chariot wheels. Return to Amman and, after lunch at a local restaurant, explore the city, citadel and Roman theatre. Tonight, gather for a festive welcome dinner.

This morning, Design your Day® – choose your preferred activity from the following options:

Option 1: set out on a walking tour of Amman to experience this fascinating, modern capital city from ground level.

Option 3: relax in the Four Seasons spa, indulging in the luxurious facilities and enjoying a 50-minute massage.

After lunch, journey to Mount Nebo, in the footsteps of Moses, for expansive views of the Holy Land. Proceed to Madaba, known as the ‘City of Mosaics’, then check in at

DAY 4
Petra
Spend a full day exploring Petra, viewing the majestic Treasury, the Temple of the Winged Lions and the Palace Tomb. This former merchant city was a stop for camel caravans bringing spices, silk and slaves from Arabia to the Mediterranean, but was lost for 1,000 years until explorer Johann Ludwig Burckhardt rediscovered it in 1812. Later, depart for Wadi Rum — the Valley of the Moon — which, with its immense size, colour and awe-inspiring shapes, creates an almost supernatural atmosphere. Tonight, experience a Bedouin dinner and stargazing at your comfortable desert camp.

DAY 5
Wadi Rum
This morning, venture into the rose-tinted mountains and marvellous desert vistas of Wadi Rum. This is where T.E. Lawrence (‘Lawrence of Arabia’) lived with his Bedouin friends and allies during World War I, and the wadi (valley) is still home to a number of Bedouin families. Traverse the landscape by four-wheel drive, then via camel – riding like the locals. This afternoon, travel north to the Dead Sea, and settle into your accommodation upon arrival.

DAY 6
The Dead Sea
Today, visit Bethany Beyond the Jordan, said to be the place where John the Baptist baptised Jesus Christ. This UNESCO World Heritage Site features Roman and Byzantine remains and is a place of pilgrimage for many. Return to your resort hotel for time at leisure and a float in the buoyant, mineral-rich waters of the Dead Sea.

DAY 7
Jerusalem, Israel
Cross into Israel and drive to the Mount of Olives for a view over the Temple Mount (al-Haram el-Sharif). Visit the Garden of Gethsemane, where Jesus is said to have prayed with his disciples before his crucifixion. Stroll through Mahna Yahuda, Jerusalem’s largest food market, which takes up an entire neighbourhood between Yafo and Agripas. Round off your market tour with a delicious lunch. After a full day, check in and, later, dine at your hotel’s restaurant.

DAY 8
Jerusalem
Join your expert guide for a full day’s exploration of the Old City, first stopping at the Western Wall, one of Judaism’s most sacred sites. View the Temple Mount area with its Dome of the Rock. After lunch, walk along the Via Dolorosa, where Jesus is said to have carried the cross, arriving at the Church of the Holy Sepulchre, traditional site of Jesus’ crucifixion, burial and resurrection. Later, visit the Israel Museum to view a portion of the Dead Sea Scrolls. As your day ends, admire the city’s skyline during a scenic sundowner.

DAY 9
Bethlehem
Visit Yad Vashem, Israel’s memorial to Holocaust victims. Drive to Bethlehem, located in the West Bank, for a lunch served in the home of a local family – an A&K-exclusive chef’s table experience and a unique opportunity for authentic cultural interaction. Then, visit the Church of the Nativity, a sixth-century basilica that stands over a cave held to be the birthplace of Jesus. Dine tonight at a top restaurant in Jerusalem.

DAY 10
Masada
Explore the ancient fortress of Masada, built by King Herod in 31 BC atop a rocky plateau with views of the Dead Sea. Take a cable car up to this final stronghold, where Jewish Zealots reputedly made their last stand against the Romans, ultimately choosing to take their own lives rather than become enslaved. Return to Jerusalem for lunch and an afternoon at leisure.

DAY 11
Acre & Nazareth
Drive to Acre, a UNESCO World Heritage Site and one of the world’s oldest ports, to see the Crusader Halls, markets and the old town. Then, journey to Jesus’s boyhood town of Nazareth. After lunch, visit the Church of the Annunciation, built on the traditional site of Mary and Joseph’s home. Continue to Tiberias and your hotel, which occupies a historic building along the Sea of Galilee. Prior to dinner, experience an artisanal wine talk and tasting organised by a professional sommelier.

DAY 12
Sea of Galilee
Enjoy a private boat ride on the Sea of Galilee, and then stop at Capernaum to view St. Peter’s house and the synagogue where Jesus is said to have taught. Visit the Mount of Beatitudes, site of the Sermon on the Mount. After lunch, drive to the Golan Heights to learn about the rich history and strategic importance of this rugged landscape. A source of the Jordan River, it was home to the Tribe of Dan and has remains dating to the Roman, Hellenistic and Persian periods. Gather tonight for a memorable farewell dinner.

DAY 13
Tel Aviv & Jaffa
Visit Caesarea Maritima, an ancient city built to honour Augustus Caesar and later occupied by the Crusaders. Next, discover Israel’s largest city, Tel Aviv. Located along a beautiful stretch of beach on the Mediterranean, Tel Aviv is Israel’s commercial centre — a busy metropolis renowned for its lively atmosphere. Set out on a walking tour of Jaffa, an ancient port town that has become a noted artists’ colony, located just south of Tel Aviv.

DAY 14
Depart Tel Aviv
Today, bid farewell to Israel after exploring some of Western Asia’s most historic sites and places of pilgrimage. Transfer to the Tel Aviv airport for your departing flight.

Inclusions
The price shown is a guide - based on two people sharing.,

Your holiday will be tailor-made to suit you and there are many factors that can influence the price, such as standard of accommodation, class of flight and time of year. Ask your travel specialist for more information. All prices and details are subject to change and availability.

Sign up for our emails to be the first one to receive latest happenings from us.

Stay safe whilst you travel

7 Seas Holidays acts as an agent providing holiday inspiration from our third party travel partners ( e.g. flight, hotel and transfers). For flights we act as your agent in processing your booking with the consolidators. Each element of your holiday booking creates a separate contract between you and the supplier of the product.